During the long Islamic rule in Bengal in the medieval period, the rulers made many magnificent mosques, a big part of which is located in current days Bangladesh. These mosques typically had a big pool annexed with it, which was part of charity work by the state, to facilitate the religious needs and also fulfill the demand for drinking water. As the stone was not available in Bengal, these mosques were mostly built with burned clay, ornamented with beautiful terracotta. Bagha Mosque is one of these beautiful mosques in current day’s Bangladesh.

Bagha Mosque is a beautiful pre-Mughal period mosque, located in a remote village named “Bagha”, 40 km south-east of Rajshahi. It is known from an inscription stone found in the Bagha Mosque complex that it was built in 1523 A.D. by the Sultan of Bengal Nasiruddin Nasrat Shah. He was the son of Ala-ud-din Husain Shah who was an independent late medieval Sultan of Bengal, and founder of the Hussain Shahi dynasty. The inscription stone is currently preserved in a museum in Karachi in Pakistan. 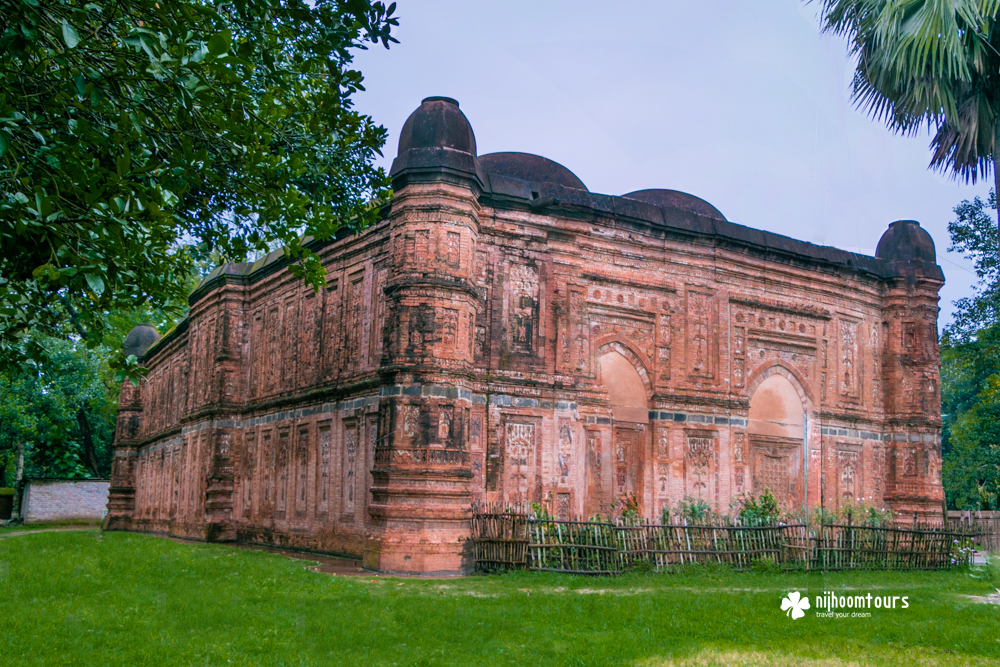 Bagha Mosque is 75 feet X 42 feet in length, 24 feet 6 inches in height. Its walls are 08 feet thick. The whole compound is built in a raised platform, annexed with a big pool. There is two entrance in north and south side to enter the compound. The north entrance is recently built after the renovation. The south entrance is intact and has octagonal pillars with a dome-shaped top.

The mosque has four octagonal corner turrets, which form a part of the building. These turrets are beautifully decorated with terracotta. The top of these turrets are dome-shaped and still exist. There are five-pointed archways on the east side, and two on the north and south side each, to enter the mosque. The archways in north and south walls are closed by gratings. 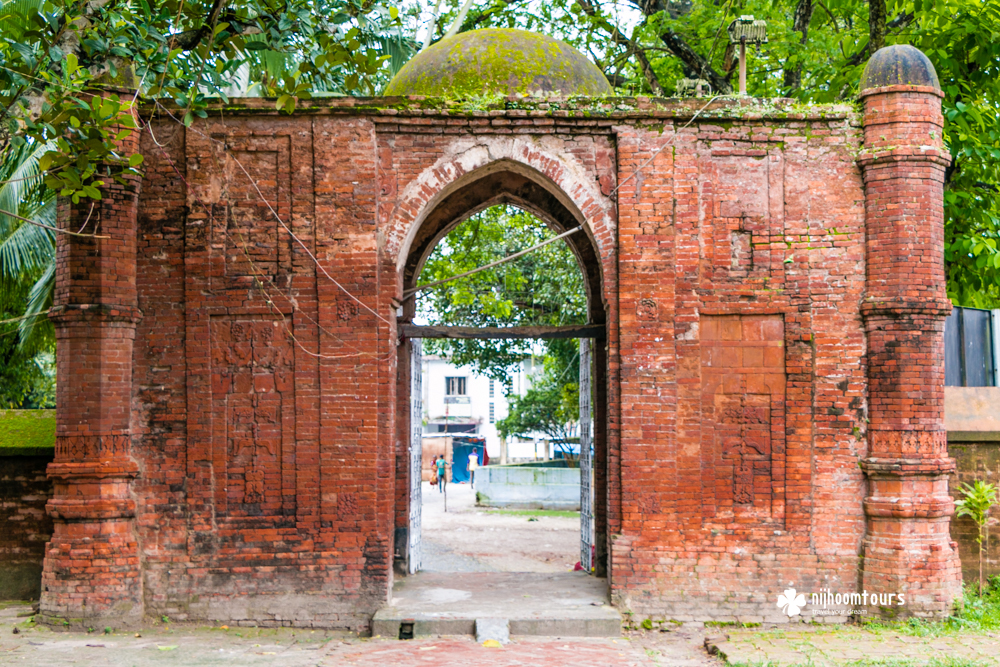 The mosque has 10 domes in total – 05 dome in 02 rows each, supported by four corner turrets and six free-standing stone pillars. The roof of Bagha Mosque was collapsed during the great earthquake in 1897 AD. and was carefully restored later in 1980 A.D. by the archaeological department of Bangladesh. 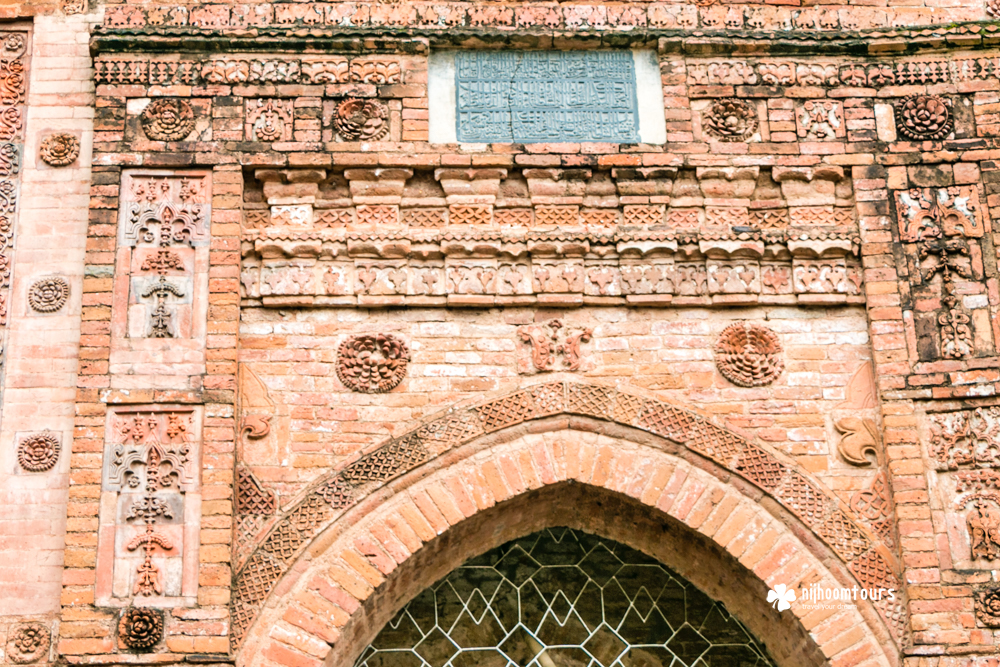 In the west wall, the central mihrab is located straight ahead of the central entrance. Two other mihrabs are located on the south side of the central mihrab, straight ahead of the two southern entrances. Instead of the fourth mihrab on the northern side, there is a beautifully designed panel. The fifth mihrab is small and located on the top, which indicates that there was a gallery on this corner, which was normally made for the rulers, higher officials, and their immediate entourage. 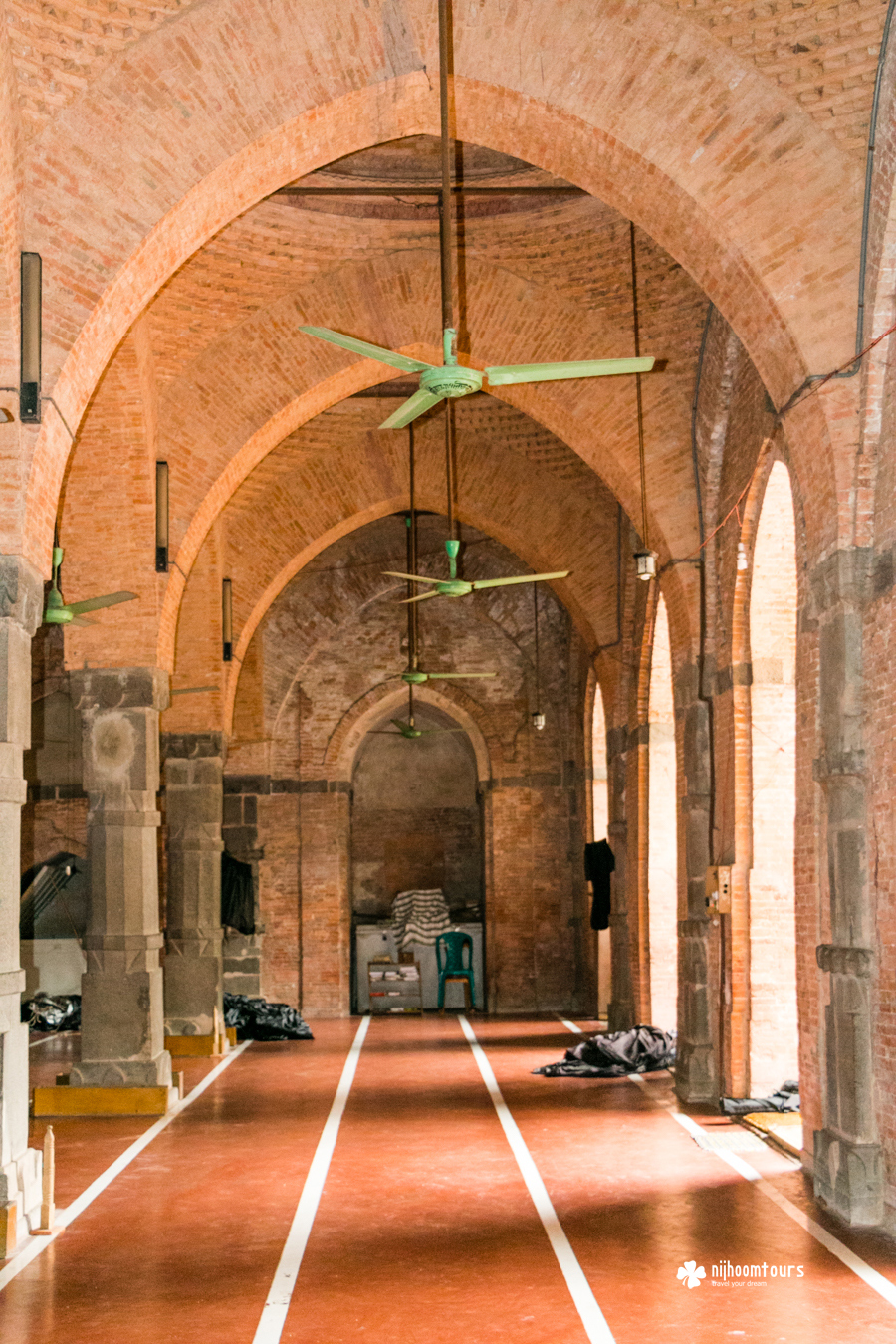 The whole outer walls of Bagha Mosque are very beautifully decorated with terracotta. A 30 feet X 20 feet size paved in-house pool has been discovered outside the mosque during the excavation work in 1997, which has stairs from three sides. It had a tunnel connection with the inside.

A Muslim holy man named Shah Doula came to this area in 1505 AD from Baghdad with five companions to spread Islam, who said to be the founder of the area ‘Bagha’. On his fame, many people were gathered in this area. There is a shrine of Shah Doula, his five companions, and many unknown people on the northern side of the mosque. Every year a two-day fair is organized here during the Eid-ul-Fitr in Bangladesh which is famous as “Bagha Fair”. You’ll see lots of activities here if you visit this mosque at this time. 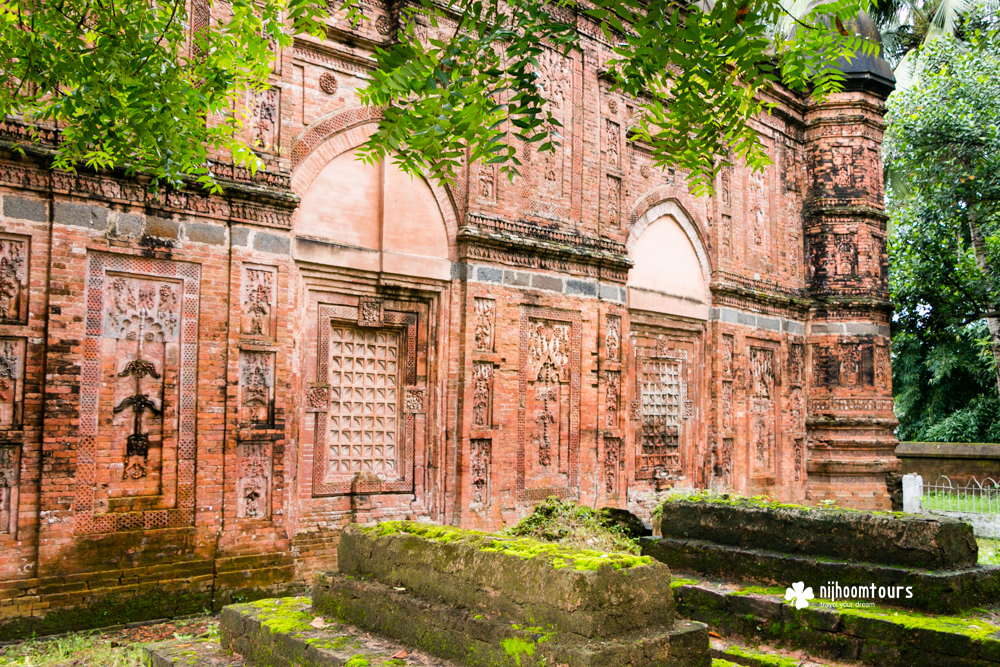 Have you ever visited the Bagha Mosque in Rajshahi? How magnificent have you found it? Have I missed something here? Share your thoughts and experience with us in the comments. Any questions about visiting Bagha Mosque? Ask us here! Consider sharing it on social media so that more travelers can know about this beautiful country which is little known to everyone.

You might be also interested in reading 10 Most beautiful historical Mosques in Bangladesh and 10 Most impressive archaeological sites in Bangladesh you can’t miss on your trip.