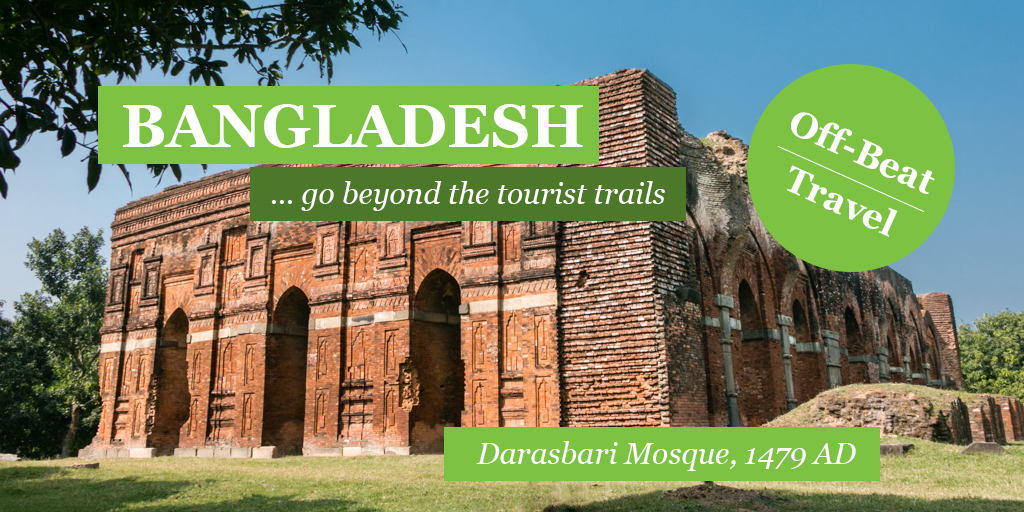 Darasbari Mosque is a great example of the Sultanate period architecture of Bengal. This mosque was the 3rd largest mosque in Gaur, the ancient capital of greater Bengal. It was constructed in 1479 A.D. by the restored Iliyas Shahi sultan Shamsuddin Yusuf Shah, ruler of Bengal between 1474 and 1481, son of Barbak Shah.

The Arabic word ‘Daras’ means lesson, which indicates that the mosque was named on the nearby Islamic school “Darasbari Madrasa” which is completely ruined now. Darasbari Mosque is definitely the most beautiful historical brick-built mosque in Bangladesh. Although presently the mosque has no roof and has a fallen veranda, no other historical brick-built mosque could be compared to the boldness of it’s design and beauty. 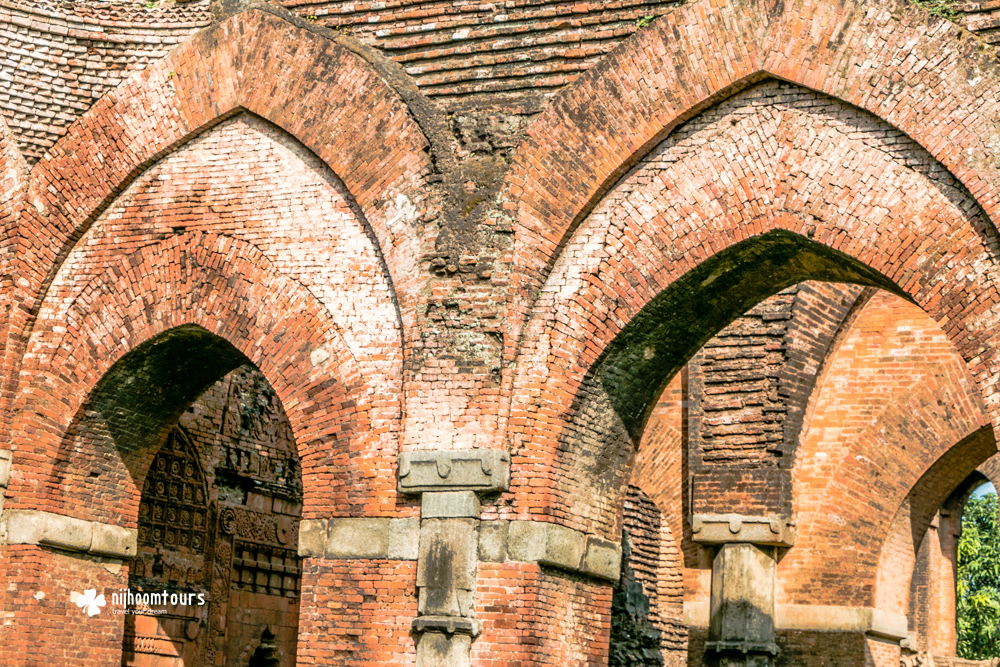 The mosque is 98 feet in north-south and 57 feet in east west. Inside of the mosque was divided in three parts. The central nave runs east-west dividing the mosque longitudinally, which is 38′-9″ x 10′-9″ in size. Two prayer hall in both side of the central nave was divided in three parts each with two rows of pillars. Although the whole mosque was built with brick, the pillars were made of stone. 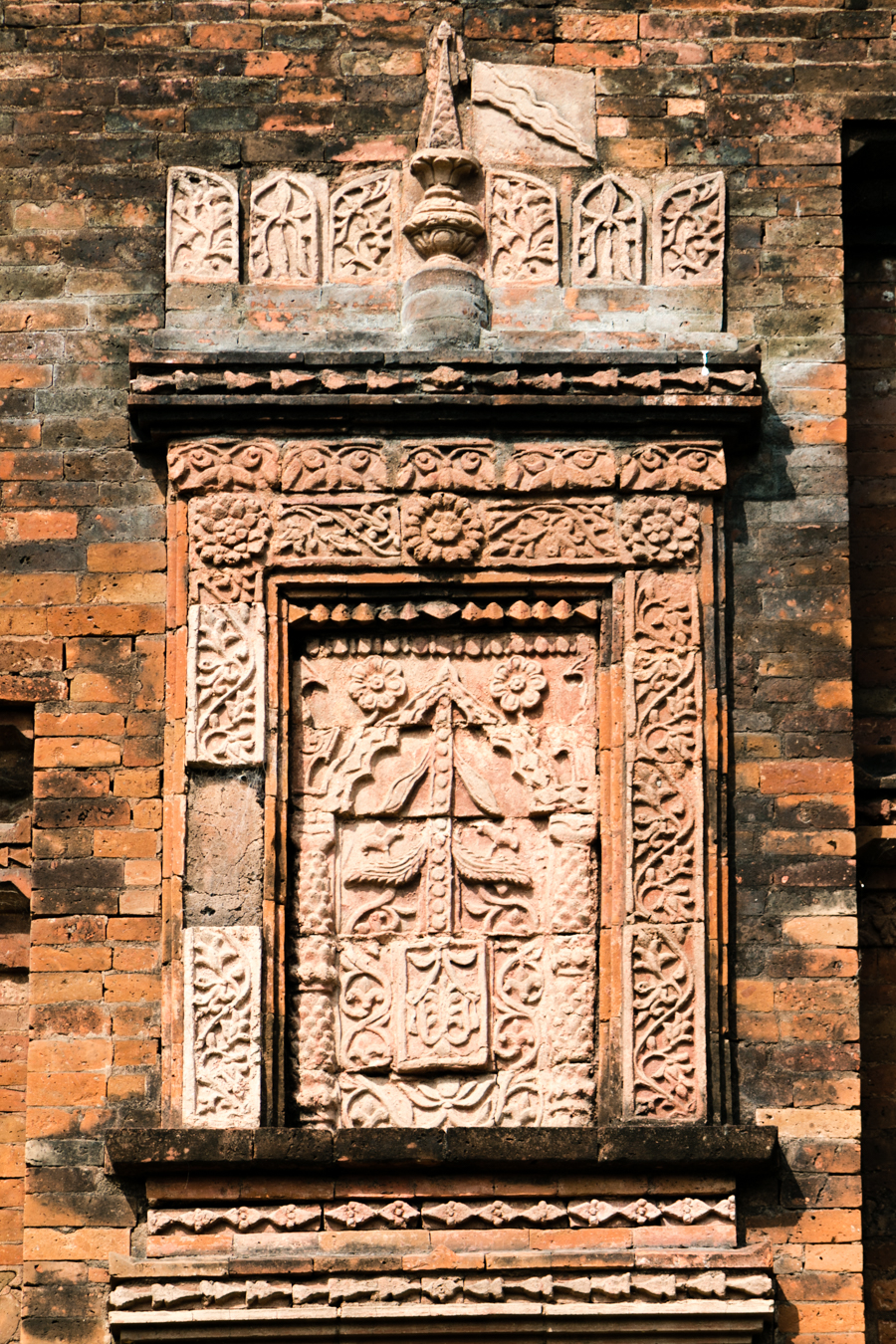 In the east side of the mosque, there was a veranda, which is ruined now. The scholars guess that the veranda had a slightly smaller chauchala vault over the nave of the veranda and three smaller domes on each of its sides, making a grand total of four chauchala vaults and twenty-four domes in the whole mosque, all now vanished. Brick piers carried the vaults and domes of the roof and stone pillars respectively, all now broken and free standing. Above the pillars sprang the pointed arches, which held the supporting pendentives filling up the corners of the square base of the dome.

An important feature of the mosque was the existence of a royal gallery, often erroneously described as a ladies gallery, in the northwest corner of the hall, approached from outside through a staired platform protected by armed guards at the entrance. It was this gallery, which marked this mosque, like several others in the city, as the Friday Congregational Mosque (Masjid-i-Juma). There was a gate to the north of the mosque, now reduced to debris. The mosque was strengthened in the corners by octagonal towers – those of the east now ruined, keeping only the traces to a certain height. 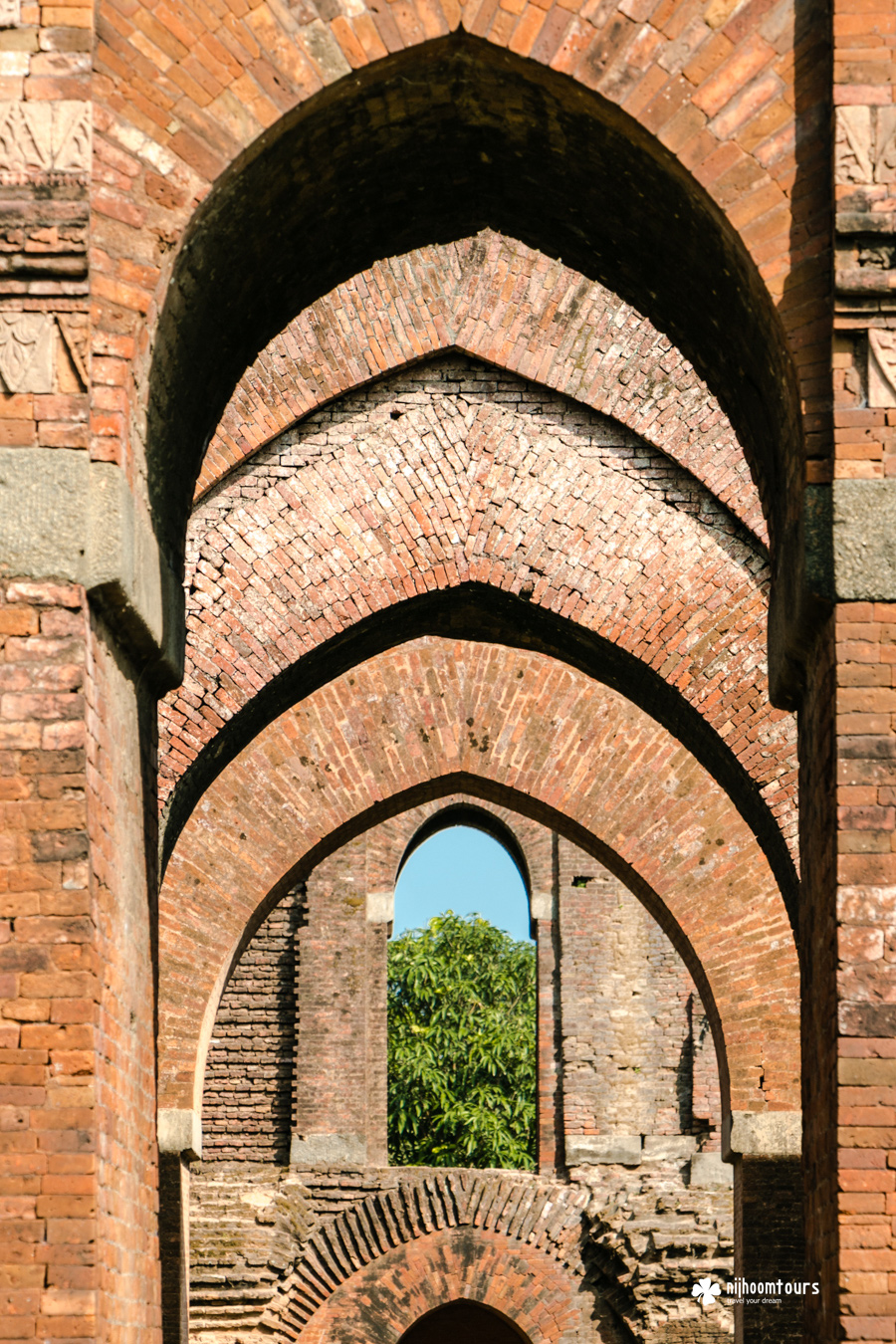 The prayer room of Darasbari Mosque is accessed from the east by seven pointed-arch openings from the veranda. The central archway was larger than the others. On the other hand there are three pointed archways in the southern wall and two in the northern wall.

The west wall of Darasbari Mosque contains total eleven mihrabs. Two of these belong to the royal gallery at the upper level. The central mihrab is larger than the other mihrabs, which is located on the central nave. There is a mimbar beside the mihrab. There is a projection in the western wall outside the central mihrab. 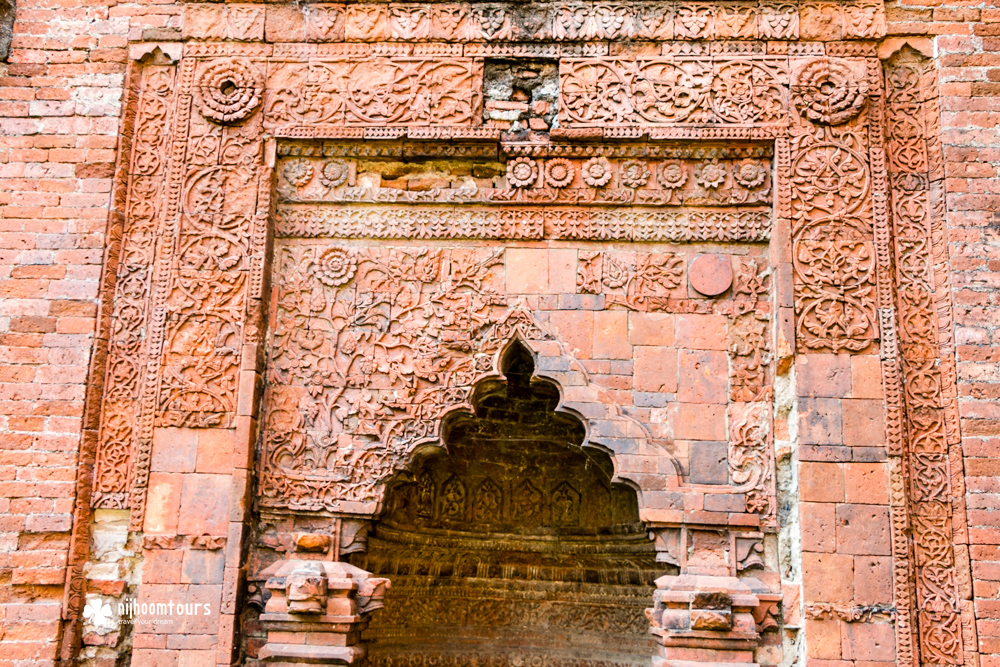 Both the interior and exterior ornamentation of Darasbari Mosque is considered to be some of the best found in the Gaur-Lakhnauti region. The exterior walls feature terracotta panels imprinted with a variety of motifs, while the interior is patterned with brick settings, and the mihrabs in each of the bays are decorated with arches framed by terracotta creepers, rosettes, foliage and other plants. A type of glazing has been used on some of the terracotta, which has both preserved it and sets it apart from other terracotta examples in the region. 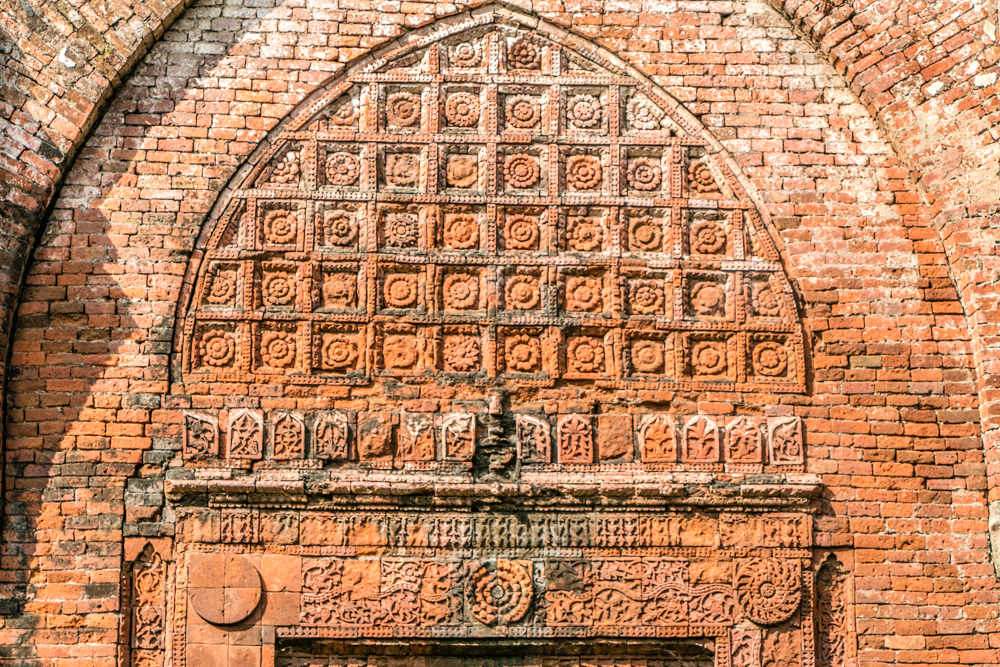 The walls extant to the west and south sides are now mostly the result of restoration work, which obliterated the original terracotta designs. An interesting ornamental motif of the curvilinear cornice was a terracotta flag placed in a running row affirming that the builder attended the mosque, and that he was the commander of the army and also of the faithful (amirul mu’minin).

Have you ever visited Darasbari Mosque? How impressive have you found it? Have I missed something here? Share your thoughts and experience in comments. Any question about visiting Darasbari Mosque? Ask us here! Consider sharing it in social media so that more travelers can know about this beautiful country which is little known to everyone.