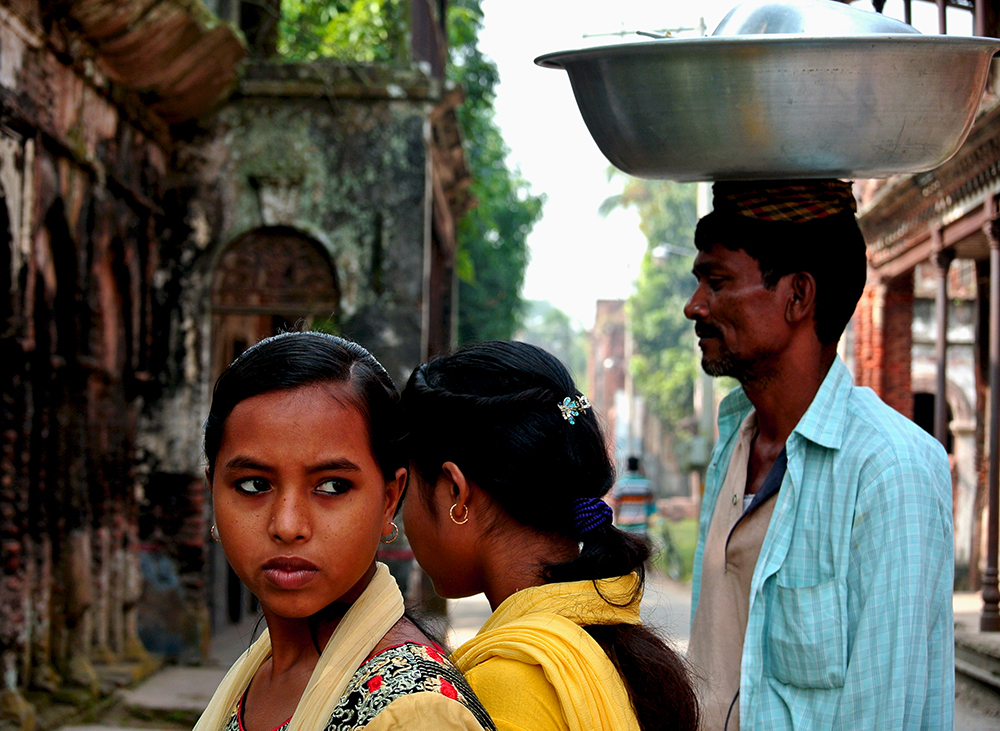 I had never imagined that I would find myself in Bangladesh, but you never know where life will lead you: the man I fell in love with grew up in Bangladesh. He had survived his visit to my native Essex, so it was only fair I visited his country! My husband is from Dhaka but it had been a while since he had visited, and he wanted to use a tour company to take the stress out of organizing outings and negotiating the formidable traffic.

Our research led us to Nijhoom Tours and we decided they were what we were looking for. We booked two-day trips: the Sonargaon Old Capital Tour and the Old Dhaka Tour.

Sonargaon was once the capital of Eastern Bengal, centuries before British rule, and is the site of reminders of a bygone age. Mushfiq our guide for the day arrived on time to pick us up from our hotel – no mean feat in Dhaka’s traffic. He introduced himself and our driver for the day and outlined what sights we were going to see. We were joined by just one other tourist – a nice small group.

He apologized about the traffic but pointed out that we would see many interesting scenes from our car windows on the route. He was not wrong – at one point we were joined by an elephant at some traffic lights! The traffic was bad but Mushfiq kept us entertained by talking about Dhaka’s history and people. Eventually, we left the traffic and hustle and bustle of Dhaka behind and were cruising through lush green countryside.

Our first stop was an enchanting 500 years old red brick mosque, not used anymore but preserved as an example of the architecture of the time.  While in the area, we dropped in on a school made out of bamboo where we were invited in to see the end of an English lesson. The children seemed delighted to have visitors and were very keen to practice their English and have a go on Mushfiq’s iPad! 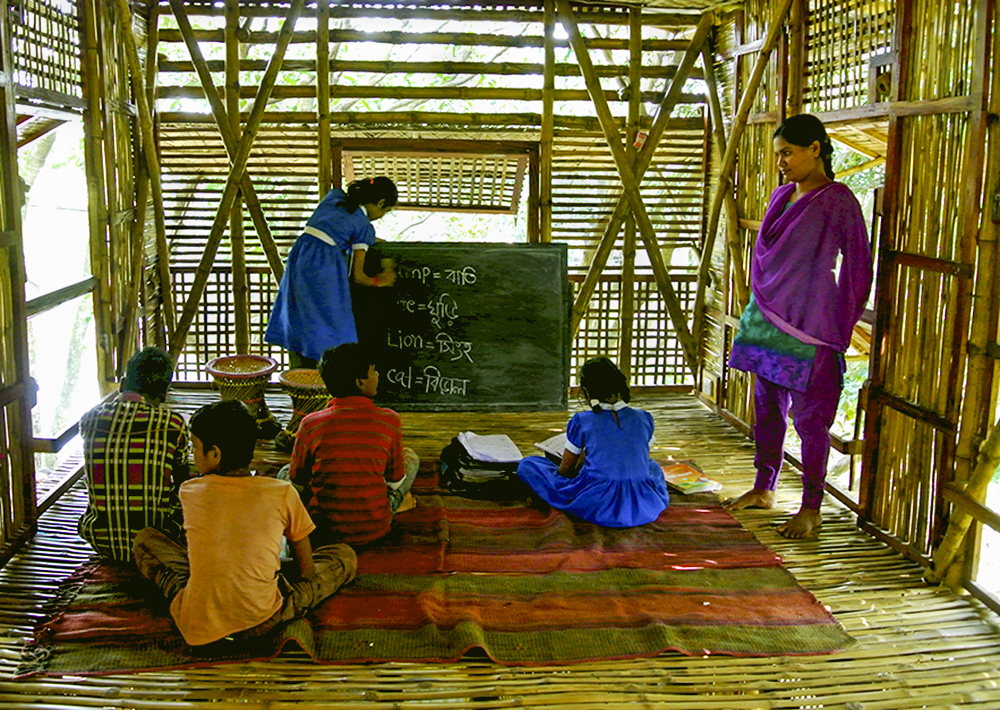 Waving goodbye to the children we continued through Sonargaon’s sleepy back roads to a beautiful pink and white palace. Now a museum, it was once a Hindu merchant’s home that has been beautifully preserved.

Taking a respite from the history tour, Mushfiq wanted to show us something of life on the banks of Bengal’s mighty rivers.  Being close to the confluence of 03 rivers (the Meghna, Brahmaputra, and Buriganga), he led us through a street market to the shore, where we cast off in a motorboat for a small village on an island in the middle of the water. The river is so wide you can’t see one bank from the other. Through the haze we saw many brightly painted dredgers in action in their daily battle to clear the silt clogged river, boats laden with red bricks and small fishing boats- their occupants waving enthusiastically as we passed. 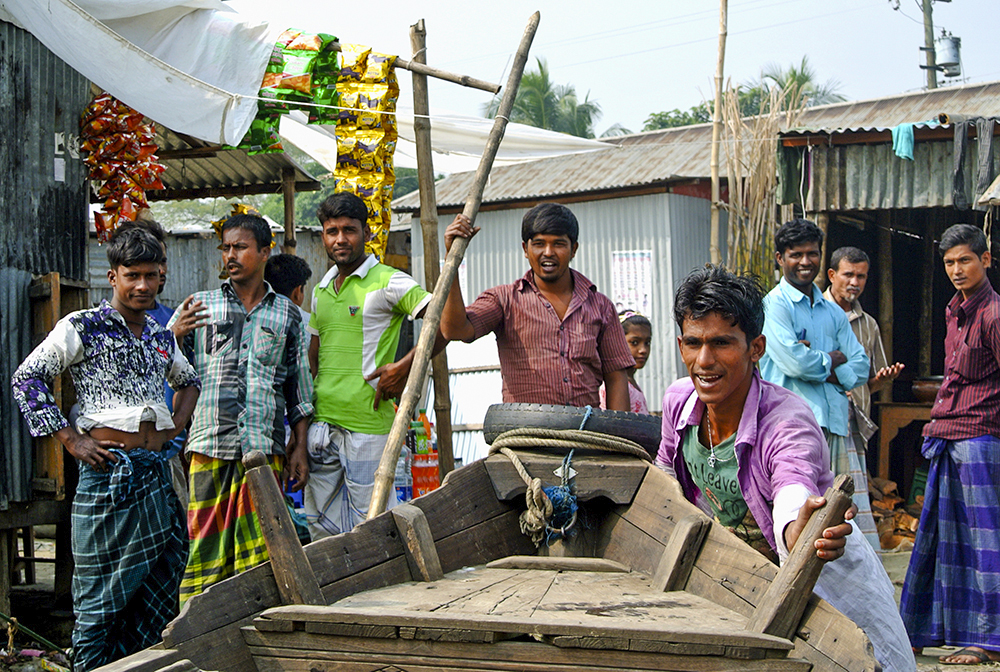 The villagers gave us a very warm reception and were keen to show us the new houses they were building and the new village toilet. Mushfiq acted as a translator so we could answer the villager’s questions and them ours. We found out that they grow several types of rice and also catch fish to earn income. We wandered through the village with a growing number of excited children behind us and ended up on a bridge with a breath-taking view of the various islands spanning the river.

I was reflecting on what it must be like to live in such a remote place as we made our way back to our boat when one of the children requested that we ‘like’ the village Facebook page!

Once back on the boat, Mushfiq made a phone call to place our lunch order at a local restaurant so that it would be ready just as we arrived at the restaurant on the other side of the river. He informed us that before adding a restaurant to their list, Nijhoom tests out and makes sure that their kitchens have good hygiene standards before taking any guests there.

Our delicious lunch consumed, it was time to head off for what was the highlight of the day for me – the abandoned merchant city Panam Nagar. 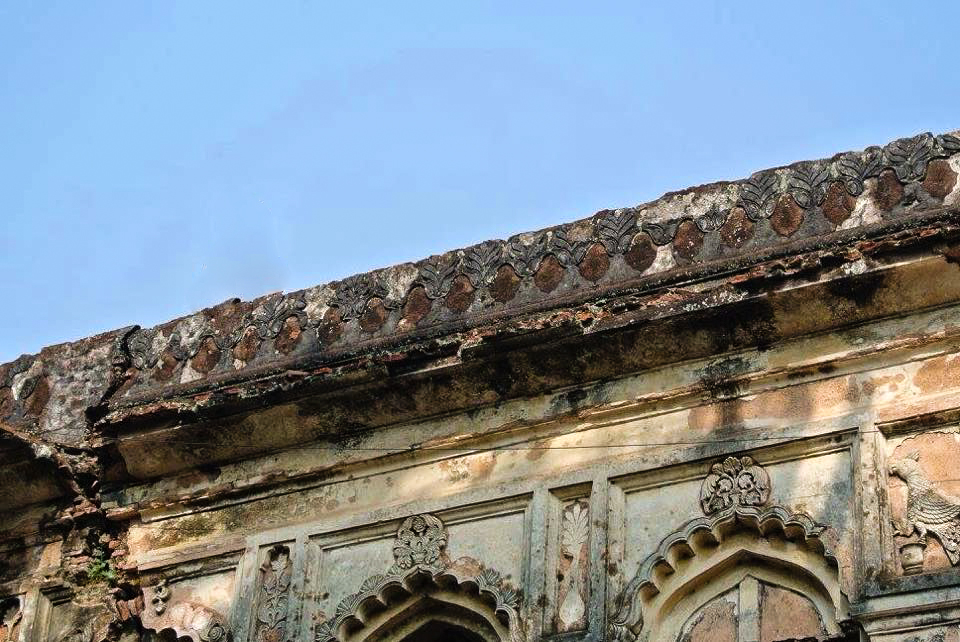 The city grew up in the late 19th century as a trade center for cotton fabrics during British rule. The grand colonial European-inspired houses were built by Hindu cloth merchants. Falling into disrepair at the end of British rule and the area being abandoned after the Second Kashmir War in 1965, these beautiful buildings are now gently decaying and being reclaimed by the jungle.

Fortunately, the area is now protected under the Department of Archaeology of Bangladesh. Many intricate details have survived however and we spent a long time marveling at the houses and imagining the lives of the former residents. There are people living nearby, so despite the houses being empty, the street was quite busy and we were also much in demand for selfies with the locals!

The last stop of the day was the remains of a very grand Indo-European house. Many locals refuse to go near it as it is said to be haunted. The encroaching jungle has shut out most of the daylight and with its overgrown courtyard and damp crumbling passageways, it was indeed a little spooky. 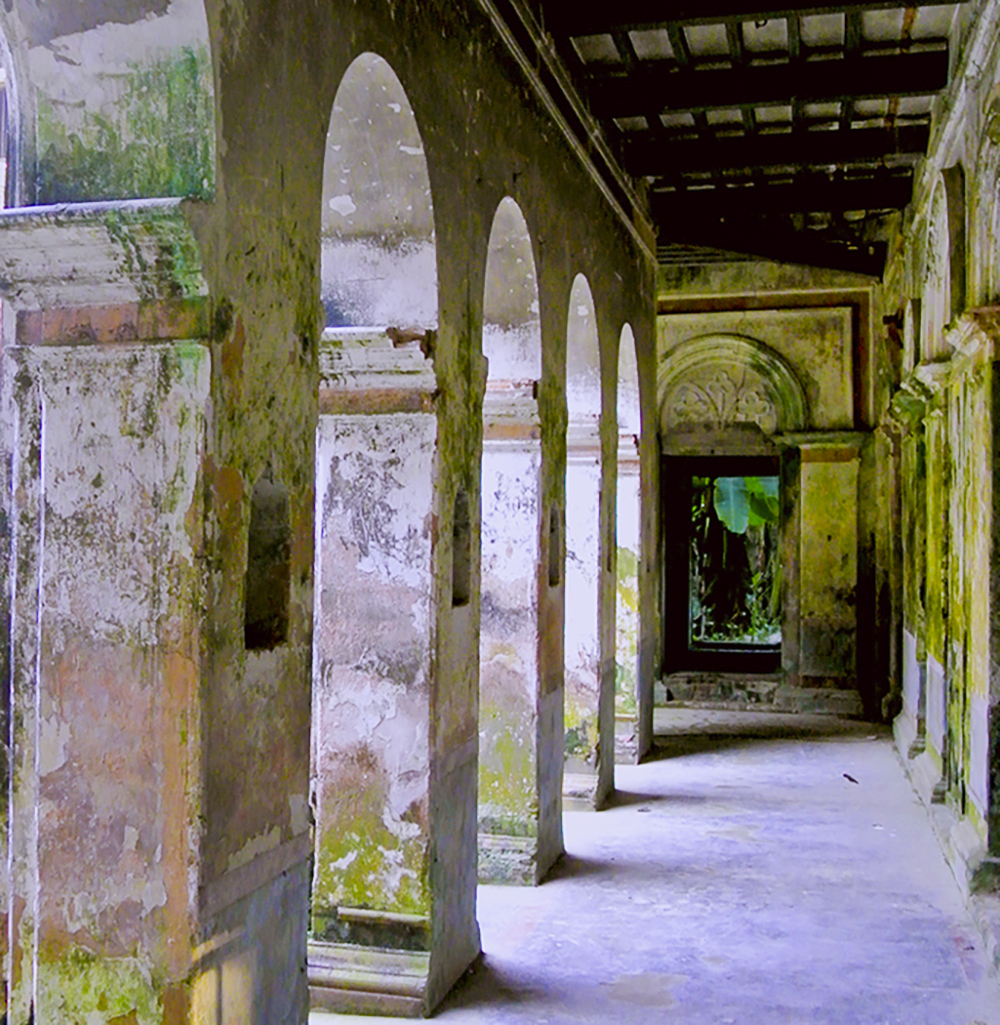 Leaving the countryside behind we soon found ourselves back in Dhaka traffic but spent the time laughing and joking with our fellow traveler, Mushfiq, and the driver, and before we knew it we had arrived back at our hotel.

Mushfiq and the driver arrived on time and we set off by car but quickly swapped to rickshaws, as these are far better at navigating the narrow streets of old Dhaka. Again, Mushfiq explained the sights we would see on the tour.

Our first stop was the brightly colored Dhakeshwari Temple, where we saw Hindu worshipers making offerings and dancing, followed by another adrenaline-fueled rickshaw ride that took us to the Star Mosque with its beautiful mosaic interior. We were also able to admire the Armenian Church, set up by the community that migrated to Dhaka in colonial times but have now moved on. 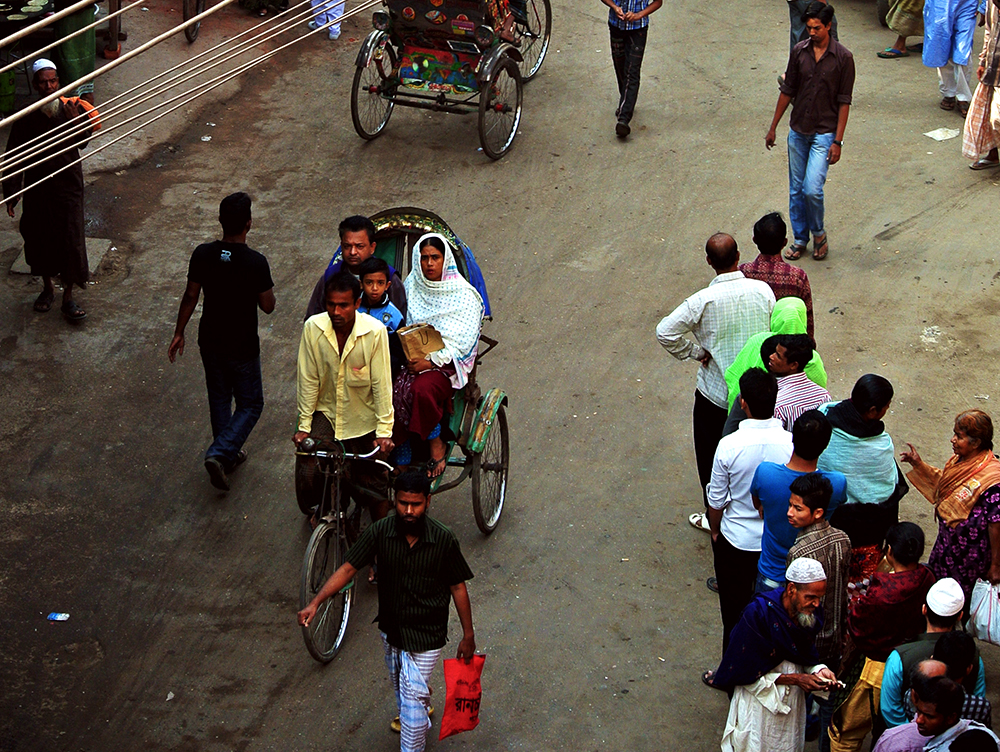 The next sight – Lalbagh Fort, was a haven of tranquility away from Dhaka’s crowded streets. Inside the pale pink walls are green lawns, water features, and well-tended rose patches, which make a perfect backdrop for Dhaka’s young love-struck couples to stroll through. Work on the fort was started in 1678 by the Mughal price Muhammad Azam. He was called away by his father and work on the fort stalled. Shaista Khan, the new subahdar of Dhaka, felt unable to complete the fort when his daughter Pari Bibi died there. His daughter’s tomb is one of the main features of the fort.

The highlight of the Dhaka tour for me was a short boat trip on the Ganges with commuter boats, steamers, and ferries negotiating their way along the almost jet black river. 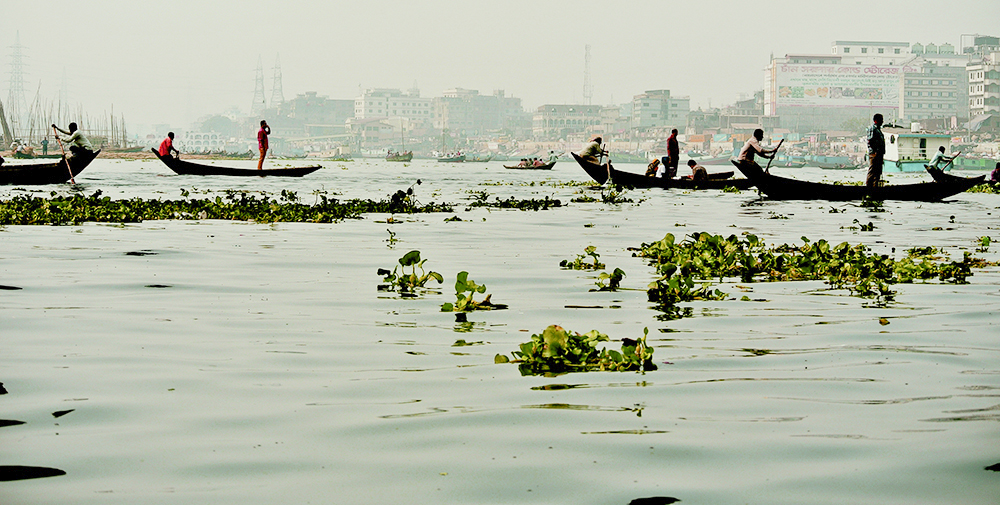 Throughout the day, Mushfiq informed us about the history of each site in a very engaging and articulate way. He is clearly passionate about his city, and his enthusiasm for it definitely rubs off on you.

Why I will be back!

Bangladesh is a breath of fresh air compared to many well-worn tourist routes where you are constantly hassled by touts or traders and subjected to phony ‘local’ experiences, dressed up for the masses with a gift shop at the end. It is a country where tourism is in its infancy and people will be delighted that you have made the effort to visit their homeland. You will become a tourist attraction for the locals, so expect to appear on many Bangladeshi Facebook pages!

Dhaka is one of the most populous cities in the world, and those not used to such cities could feel overwhelmed or get hopelessly lost! Using Nijhoom Tours meant that we could focus solely on safely enjoying the many attractions whilst our capable guides dealt with the logistics.

I can’t wait to go back!

If you’ve enjoyed the story, consider sharing it on social media so that more travelers can know about this amazing country which is little known to everyone. Enjoy!