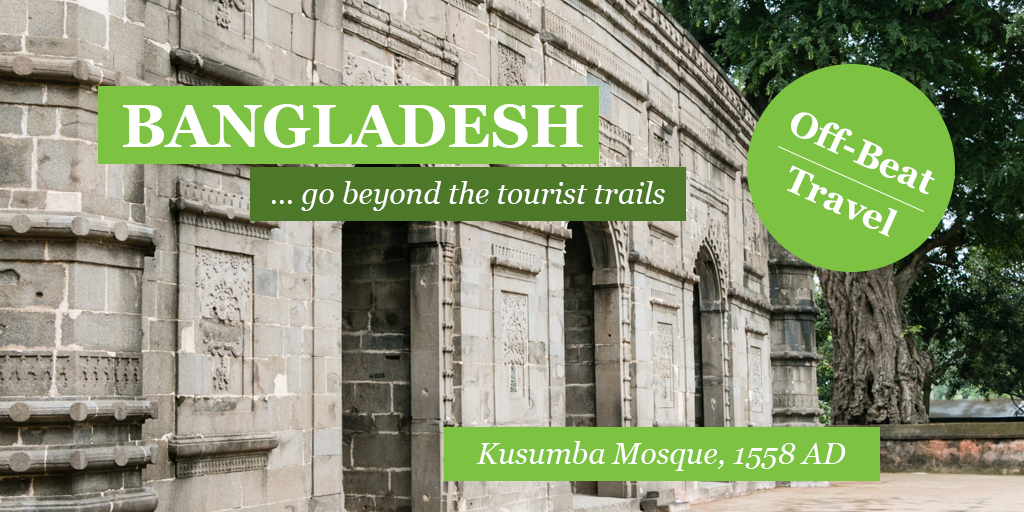 Kusumba Mosque is a beautiful mosque in Bangladesh, located at the north-western part of the country, on a village named Kusubma. It was built on 1558-59 AD during the Afghan rule in Bengal by a high ranking official named Sulayman, during the reign of Ghiyas-ad-din Bahadur Shah. This mosque is very well preserved and in an excellent condition.

Kusumba Mosque is located on the west bank of a big pond measuring 381 m x 274 m. It lies inside a walled enclosure with a monumental gateway with standing spaces for guards and a big courtyard. The foundation and most of the building was constructed from bricks, but the outer walls, some interior walls, side screens and columns are made of stone. 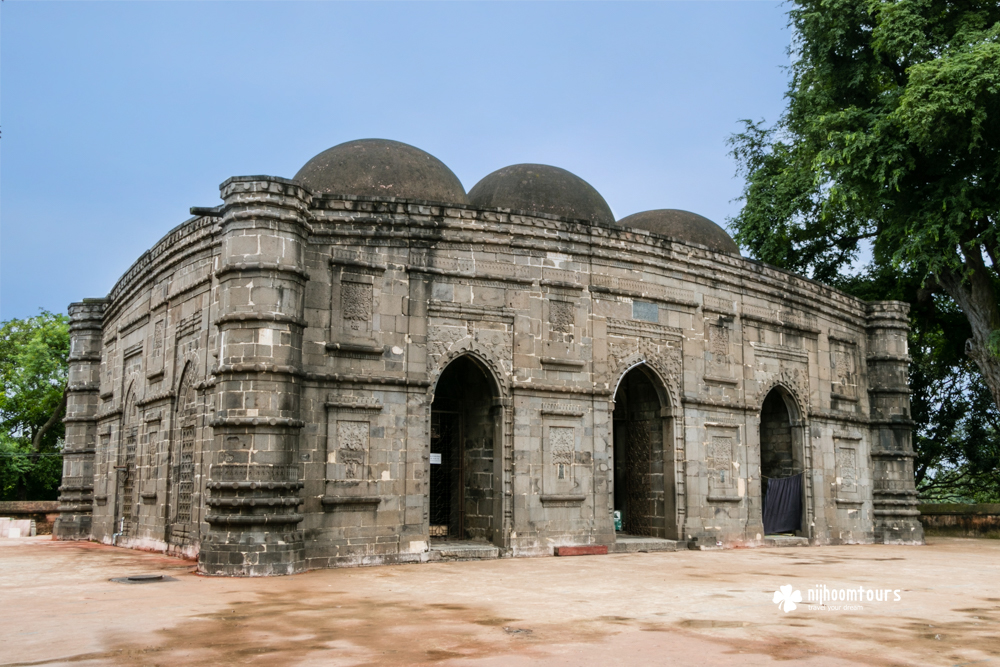 Stone was not available in Bengal, hence rarely used. Although scarce, stone was used in most of the finest monuments of Bengal. The use of stone symbolizes the economically affluent society. Only six stone mosques built during the early Islamic or Sultanate period exist in greater Bengal. Kusumba Mosque is one of them. Stones used in this mosque are dark black-basalt that was transported from Rajmahal hill of Bihar through waterways.

Although Kusumba Mosque was built under the Afghan Suri rule, the architectural pattern was not influenced by the earlier Suri architecture of North India. It was constructed with a Bengal style. It conforms to the typical oblong shaped enclosed mosques in Bengal which happened to be the order of the day. Kusumba Mosque has curve cornices in four facades, which represents the traditional rural bamboo hut, and ensured the proper or quick drainage of rainwater.

There is no minaret or tower in Kusumba Mosque, a discarded feature in Bengal, of the conventional mosque in the Islamic world. Instead of a minaret, it has four octagonal corner turrets, one at each corner of the building, which form a part of the building. A long single monolithic stone decorated with rosettes is used as lintel beam. The area (tympanum) between the lintel and the arch is sealed by stones.

Kusumba Mosque has three pointed-archways in the east side, which is the on entrance of the mosque. The northern and the southern sides have two arched openings which are closed by perforated stone screens up to the lintel. Anchor stone for holding the door post can be seen on both sides of the three frontal openings, which proves the existence of a pivotal wooden door shutter. 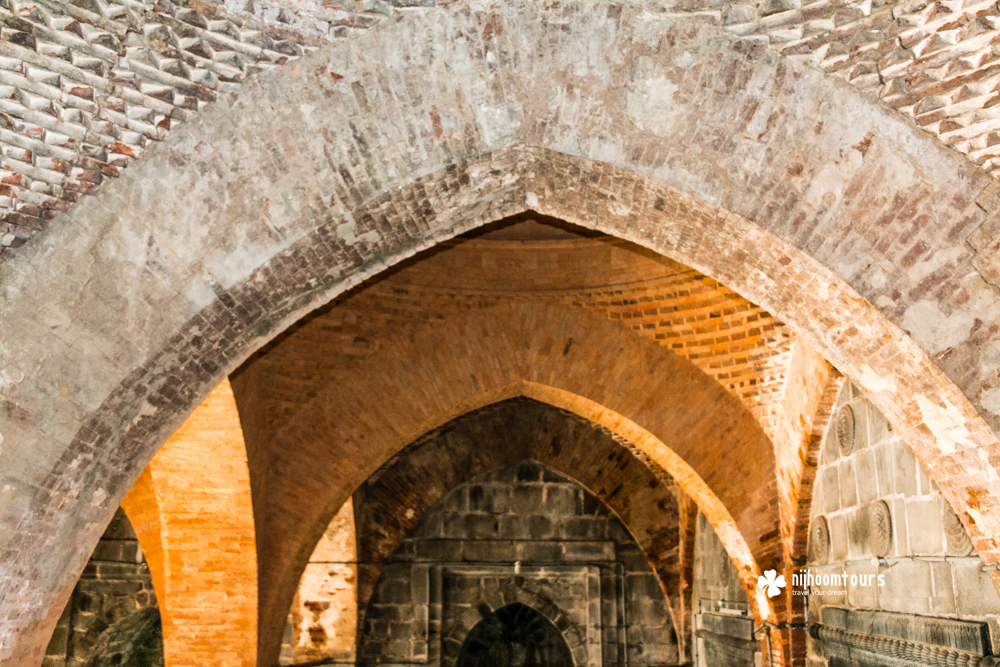 There are two free-standing stone pillars and eight partly concealed pilasters inside Kusumba Mosque, which support the roof of six domes. It has three highly ornamented mihrab niches in the west wall, among them the northern one is placed at the level of the raised gallery. The arches and the roof are made from bricks.

There is a well-designed raised gallery of massive stone pillars on the north-west corner. It is reached by a staircase from the ground level of the prayer room. There are no traces or proofs of any hand railing along these steps. This is the only surviving example in Bengal of an unscreened internal connecting staircase through the place of male worshiper, which proves that it was a place for the Sultans or rulers or builders and their immediate entourage, not a ladies gallery which is the popular belief. 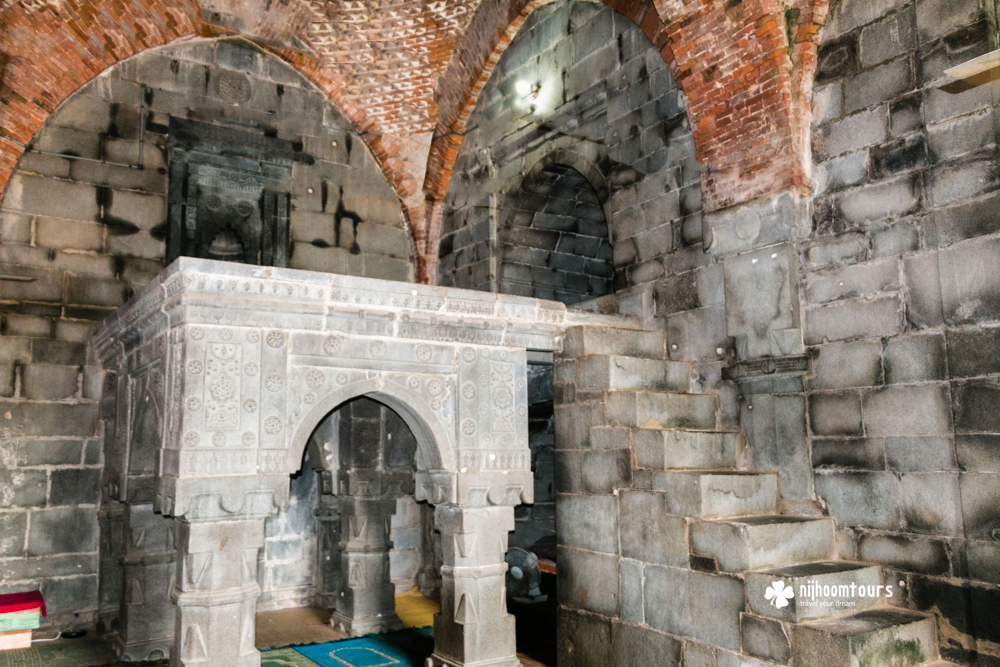 Have you ever visited the Kusumba Mosque in Rajshahi? How impressive have you found it? Have I missed something here? Share your thoughts and experience with us in comments. Any question about visiting Kusumba Mosque? Ask us here! Consider sharing it in social media so that more travelers can know about this beautiful country which is little known to everyone.